I went with some friends to the Panagbenga Baguio Festival last February. We arrived there at around 6am and the parade starts at 8am so we had very little time to get there from our rest house. 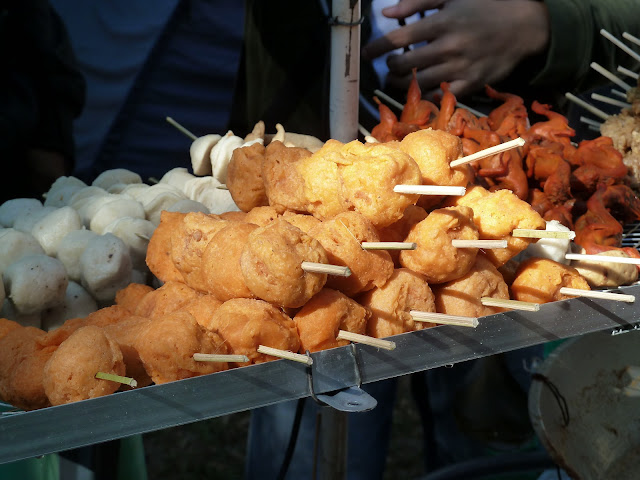 Finding and then waiting for a vacant space in the full-packed parking lots also took some time so we couldn't get a leisurely breakfast at one of the popular places.

But we were hungry so we ended up with a fairly decent meal at one of the food carts in the park near where the parade was going to pass by. Here's just some of the food cart fare we took a bite into and they actually taste good.

So there was the usual fare of squid balls and the orange ones are chicken balls. The red orange ones are fried baby chicks, which I didn't get. These are almost like balot except that you don't have the eggs portion, you get to directly see and bite into the chick. Think of it as mini-fried chicken.

The flat, white ones are fish balls and the brown, long ones are called kikiam which are delicious together with the sweet and sour and spicy sauce or just the sweet sauce. These 2 sauces are pretty much your only choice for any of the items on sticks that you order. But they really taste better with any of these 2 sauces. 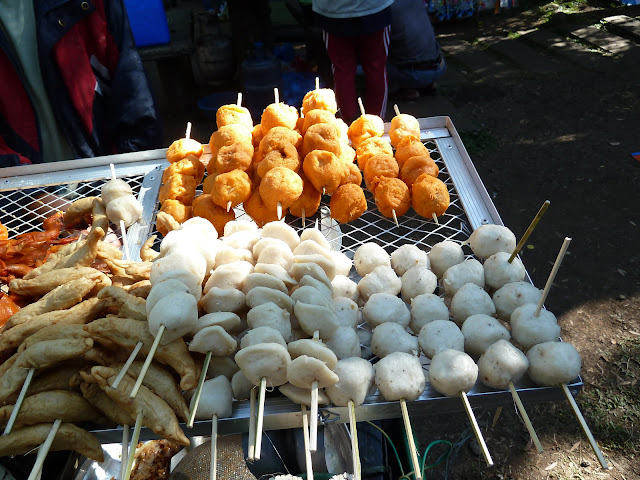 You can eat your orders on sticks or have them put in these cartoon containers with foil lining. It's convenient for holding on to the rest of the food since you eat standing around the cart. It's also good for marinating your food in the delicious sauce.

The crunchy-looking ones are breaded chicken meat/nuggets which also tasted ok except that they were oilier when you bite into them than the rest of the other items. 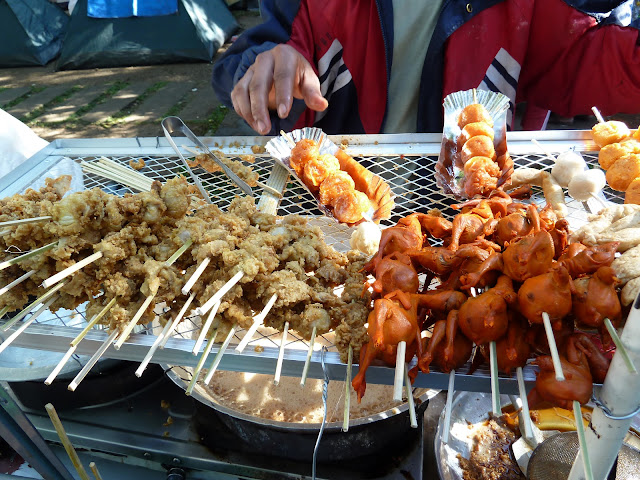 We didn't hesitate to bite into these as they were prepared very carefully; aside form the fact that we were really hungry, they looked clean and we we're assuming they were fresh as almost all homegrown food in Baguio is fresh.

Also, since they were placed directly on top of the frying pan, any other bacteria or germs would have surely been toasted dead or steamed off from the heat and the oil. I wouldn't say this is healthy fare but it is decently delicious for a hungry stomach.

After this, we went straight to getting an ideal place to shoot pictures of the festival.