My craving for pasta or pizza was missing one day and so when a friend and I decided to sit down at the Old Spaghetti House for dinner, I went straight to the non-pasta menu. 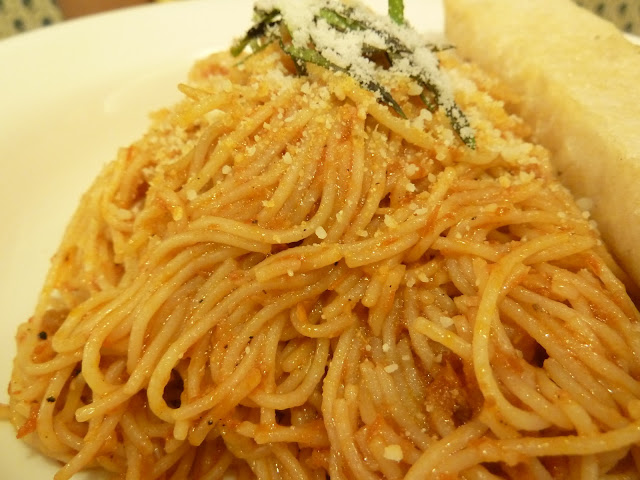 I was crossing my fingers as I pointed out my order of Pepper Crusted Fish Fillet while my friend ordered the Sun Dried Pesto Angel Hair Pasta. After all, a ruined meal because of a bad food choice is unsettling and tragic in so many ways.

You not only lose some wad in your wallet; you're also left with a bad taste in your mouth and your stomach is grumbling for more food. Luckily, this was a good decision because I finished off what was on my plate. My friend, whose favorite is angel hair pasta, enjoyed her food too.

The Sun Dried Pesto Angel Hair Pasta (P135 + P10.00 to switch to Angel Hair pasta) had heaps of pasta as you can see so aside from being tasty, it's good that they didn't scrimp on the ingredients.

Here's another shot with the garnishing on top. Yummy and filling. The pesto sauce on this one really smelled great, and I guess tasted great as well since my friend said so and she finished it off. The bread on the side was firm and crunchy too. 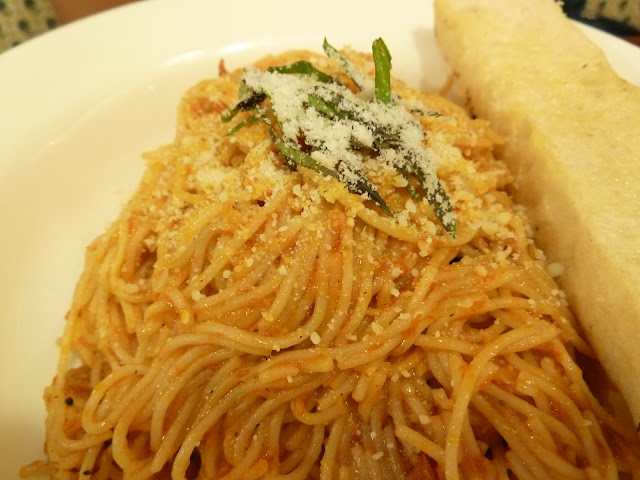 My order, Pepper Crusted Fish Fillet (P165.00). I wanted rice that night too, thus this dish. Don't you just want to dig into it right away? 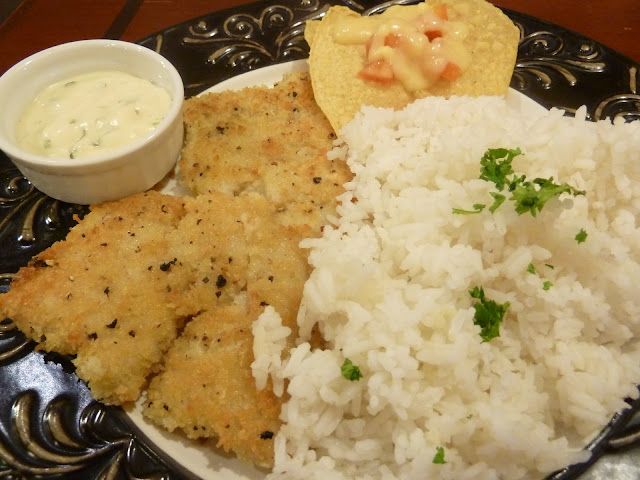 The rather large thin wafers on the side, almost the size of nachos, was topped with diced tomatoes and melted cheese. The wafer wasn't too salty so it went quite well with the taste of the melted cheese and tomatoes. Plus, the light and crunchy texture of the wafer (or were they potato chips?) contrasting with the creaminess of the cheese and tomatoes was a delight to the taste buds. I think I'll try this at home as topping or as a sandwich filling. 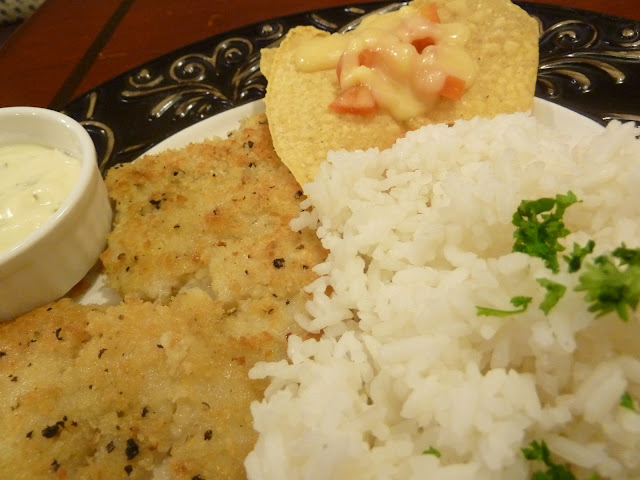 Of course, the most delightful part of eating this dish was the pepper crusted fish fillet. Here's a close-up of the fillet which tasted like Cream Dory. I notice that this fish is used in most fish fillets in a lot of restos but some of them taste bland and dry. This one however was crunchy and flavorful because of the crust and then you get the creaminess of the fish fillet in the middle. Yummy! 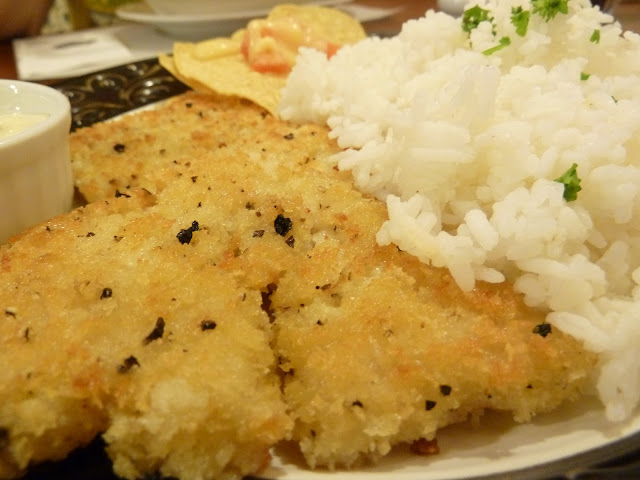 Yes, the smoke effect when the dish was set down in front of me just proves it was freshly cooked. Definitely adds more satisfaction points for this dish. 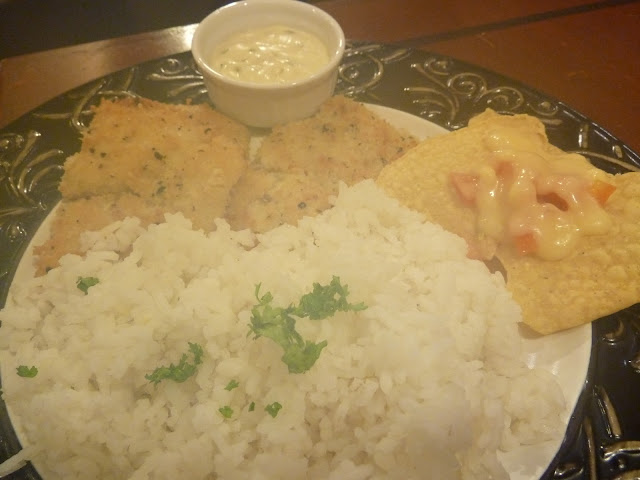 The dip for the fish fillet was very flavorful. I think it had cream cheese instead of the usual dollop of mayonnaise. So it was quite tangy and sour at the same time which was very effective in enhancing the subtle flavors of the cream dory fillet. Plus, the herbs gave the dip different burst of flavors from lemony to hints of spicy. Really yummy but the ingredients for this one were harder to figure out than the one on the wafers and I was too busy eating to ask the waiter. So the next time I eat here and order this dish, I promise to concentrate on deciphering this one. 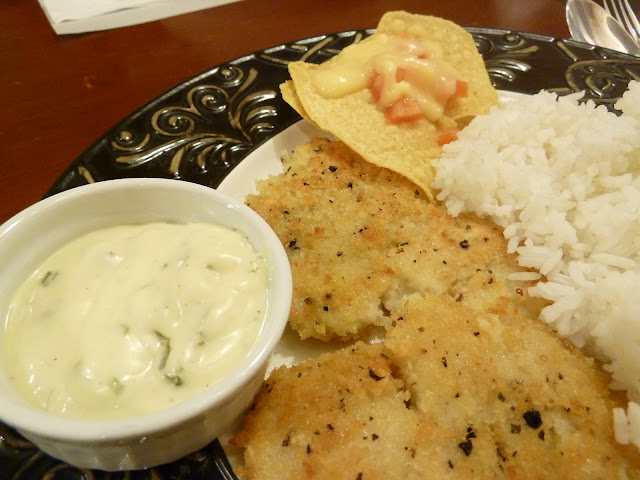 One more thing that makes this dish memorable to me is the plate it was carried on. It's not apparent in the picture but the plate was huge and the dish filled it amply as you can see. Being a lover of cute and elegant-looking stuff, I just loved the plate so much I wish I could take it home with me. But that being impossible, I'll try to find something like it for sure. 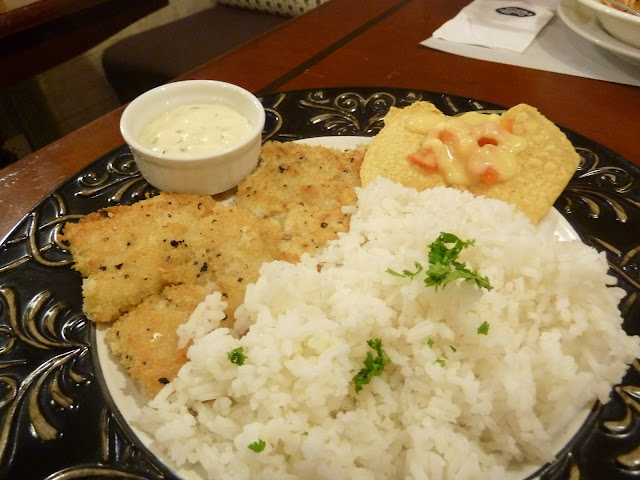 Verdict: Sometimes going against your usual food cravings can be a good chance to discover something new to delight your taste buds and for the price, this one was definitely a good food choice. Getting inspiration from the design of a plate is also a good plus for this dinner fare.

By the way, I was confused before about the name of this resto. People kept referring to it as TOSH and I simply knew it as The Old Spaghetti House. So finally, I understood that this was the acronym of the whole name (silly me, so slow) but I still prefer calling it by its full name. It sounds more rustic and delicious to me. :-)