Going grocery shopping isn't always easy for me. Sometimes, I tend to buy more than I can cook in a week. This leaves me with a lot of left over ingredients that I don't know how to use up. 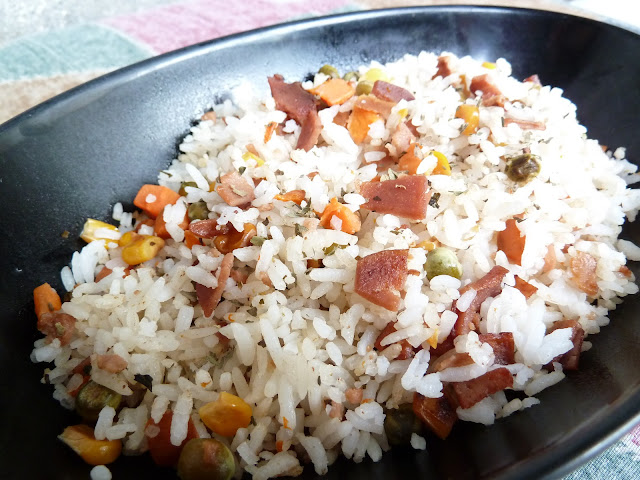 This was my predicament one Sunday. I had left over veggies composed of green peas, corm and chopped carrots. I also had left over rice and some luncheon meat from a previous dinner.

It was a Sunday, my lazy day and I was in no mood to cook anything that took some time. So I decided to put everything in one dish. The veggie bits were colorful and the rice was a great background to showcase their colors and of course, their taste.

I heated a pan and added some olive oil (but you can also use butter). I chopped the luncheon meat and sauteed it for a while. Then, I added the left over rice. When the rice was warm enough, I added in the veggie bits and mixed everything up. When I was ready to serve, I added some basil (just the McCormick kind) to give my fried rice a delicious fragrance.

This is best eaten while still warm so you can taste the buttery goodness of the veggies and the saltiness of the luncheon meat against the white rice. I was too lazy to cook anything else after this so I ate this solo and then just a banana for dessert. It was quite filling but I would have wanted a soup to go with this.

Butter may be substituted for a more creamy texture to the fried rice. However, I dislike the taste of rice fried in butter when it gets cold so I prefer using olive oil or any other vegetable oil.

For a more crispy texture, you can replace the luncheon meat with bacon or even add the bacon. Just fry the bacon and then chop before adding it to the mixture. And if you really want to amp up the taste, add some scrambled eggs to the mix. I suggest not putting salt in the egg though as the luncheon meat and the bacon already have their salty taste.

Of course, almost anything goes into fried rice like shrimps or even left over fried fish or meat. Adobo flakes sounds and tastes delicious on fried rice too. Pineapple tidbits may even be added to make this dish sweeter for kids. The only limit to making your own version of fried rice is your imagination and what your taste buds (and stomach) can take.