A friend and I came across this announcement of Subway offering half a sub for only P99.00 in one of the online magazines we frequently visit. I had not eaten there before and she highly recommends it so off we went to Subway (SM North EDSA Annex) after work. 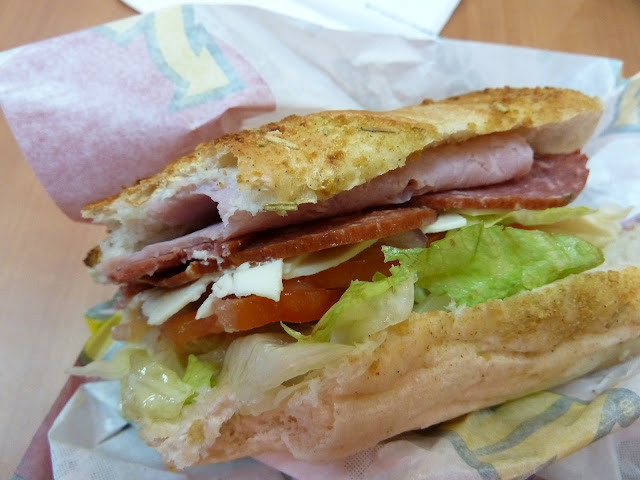 Different subs were offered for P99.00 each day. I think we went there on a Tuesday and the menu was chicken and ham. But when we ordered, we were informed that they were out of chicken and we didn't mind so we went through with our order.

After biting off enough to satisfy my taste buds, (you can see which side I started with) I was finally able to take a picture.

It looks rather big and it really is and even with the absence of the chicken, it was still pretty tasty. This was already dinner for me, a light and flavorful one which really left me satisfied. I don't know if the cold cuts, (bolognese I think) were part of the whole sandwich or a replacement to the chicken but the combination still tasted pretty good. The ham was sweet and light and the bolognese was on the tart and saltier side. Of course, the addition of cheese, lettuce and tomatoes completes the combo of this huge and flavorful sandwich. The bread we got was wheat so that makes up for added healthy points too.

I was satisfied with my first try, that's why a month later, I returned here together with two other friends who were also satisfied with their orders. However, we were too busy eating and talking that I totally forgot to get pictures of our sandwiches. So there's my reason for going back here soon. :-)