A Rainy Night Dinner @ My Thai

I've been cooped up at home for several days now ever since I started working on my freelance projects. So I was quite determined to finally get out of the house and meet up with long unseen friends. We had previously decided to eat at My Thai in Timog and so yesterday, we finally meet up. 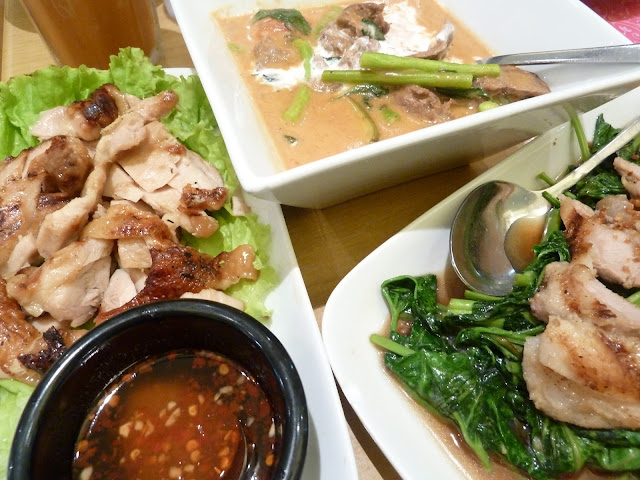 The skies were getting dark as I traveled and as luck would have it, when we finally got off to walk to the building, the rain was at its craziest and our feet were wet and we were cold when we finally got to the resto. I thought I was going to suffer from the cold air conditioning when we got in and I didn't even bring a jacket but the room temperature was just alright, whew!

Of course I enjoyed getting the chance to chat with my friends again, although one of us couldn't be there because of the heavy rains but I didn't forget to savor the food and take pictures. So here, for your drooling pleasure, some of the eats we delightfully finished off.

Since we didn't know what to order yet when we arrived, we went with a good old go-to finger food Chicken Fingers (P168.00). It was the usual, crispy and crunchy kind but what was memorable for me was the dip. The mustard gave it that extra bite that made you want to dip in some more. 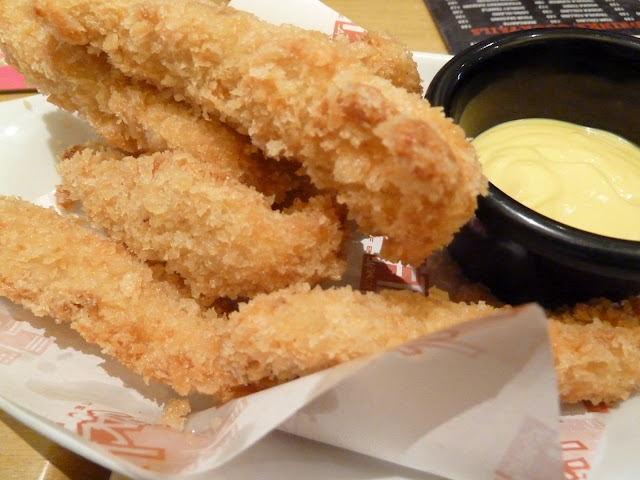 Sorry that the picture doesn't look too good. I was too hungry to hold the camera steadily  I guess. :-)

My first order was the same dish I had tasted before, the Squid Stir Fry (P280.00) which did not disappoint. I never much liked squid dishes but this one was different and really delicious.

The squid inside was soft and buttery and the taste also had a hint of lemon in it so even if you notice the oiliness from the breading, you don't give up on the taste so easily. In fact, I wanted to take some home too if not for the price. 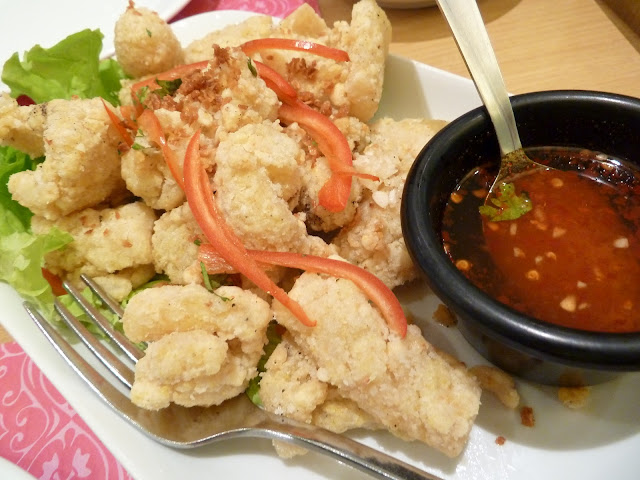 We also ordered Grilled Pork with Kangkong (P185.00) because we wanted something that sounded healthy. I was glad that the kangkong wasn't overcooked. The pork was firm and not too soft and the sauce was flavorful. Although this one was not really that memorable. There were other selections more memorable to the taste buds. 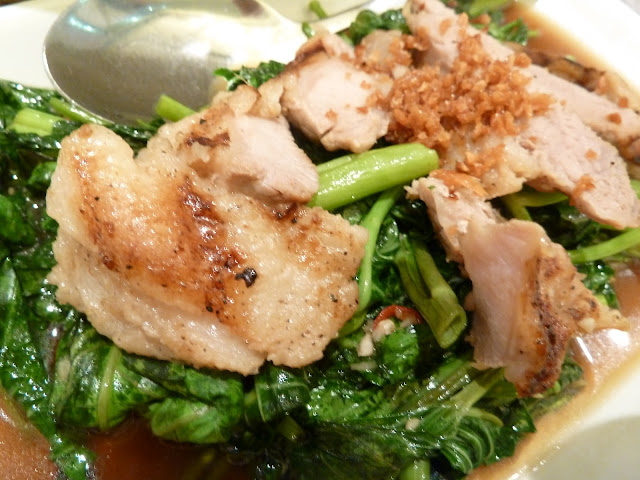 Seeing a picture of the Boneless Chicken (P270.00) on the menu made me want to order it because next to squid, I thought it was a healthy choice. Well, I tried to make healthy choices this night but nevertheless, this feast can be considered pigging out. So anyway, this dish was really nothing special. It had the same sauce as the Squid Stir Fry but I preferred the chicken more than the pork. At least, the pork was grilled so I can pretend that this were healthy choices after all. :-) 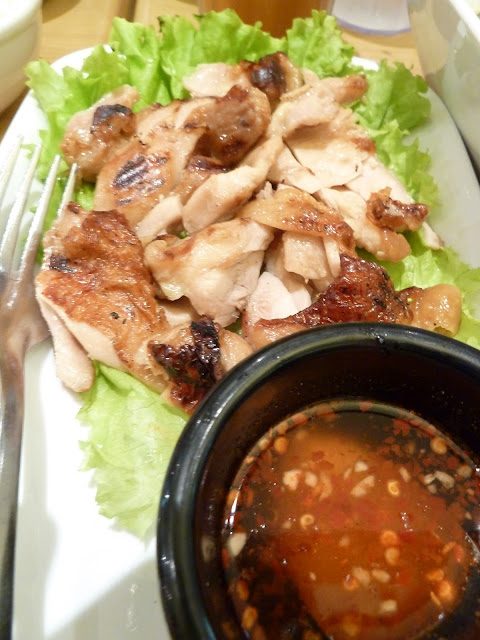 Since the menu was Thai, our companions got the Beef Curry (P295.00) which was delicious but a little bit too hot for my taste buds. After I complained about the heat, I was told it was the mild version. I guess my tongue is not fond of chili and other spicy stuff.

The consistency of the curry was rather thick, similar to that of Pinakbet and I even thought that the color was slightly like that of the butter sauce. It was tempting to taste it again but I did not want a runny nose afterwards so I moved my attention to the other dishes. 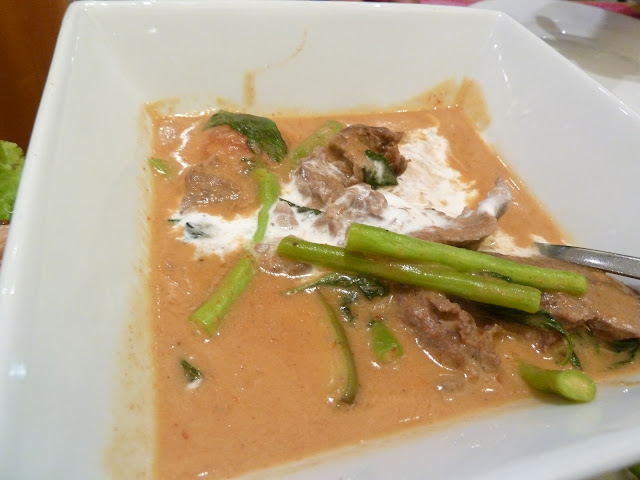 It's starting to look like we really we're pigging out but our last order was the perfect accompaniment to all these dishes - rice! Jasmin Rice was one of the options but we opted for Shrimp Fried Rice (P85.00 per cup which was really a small bowl). I find that this goes really well with the Squid Stir Fry. I guess I was in the mood for seafood that night.

I don't think I need to say anything more as the picture already tells you how flavorful this must be. It had garlic bits too! 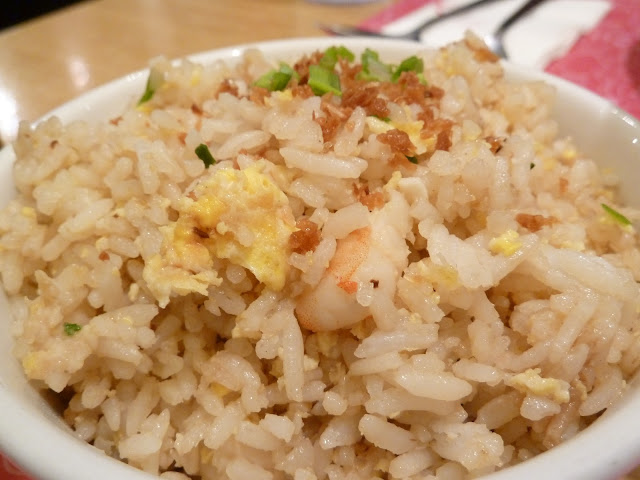 I liked the fact that the place was not too crowded as usual. Maybe because it was not a weekend and it was raining hard. We were the very first customers to come in too. The place was small but it had a very cozy ambiance which was comforting as we came from the cold outside.

The waiters were also attentive but not annoyingly so. They didn't stand around at our table for our order but instead waited to be called. In some restos, you get pressured into ordering immediately because the waiter is busy waiting for you at your table while you're still discussing your options with your companions.

I will come back here not only for the squid dish and the service but also because I want to taste their Thai Milk Tea (P95.00) which my friend says tastes really good. 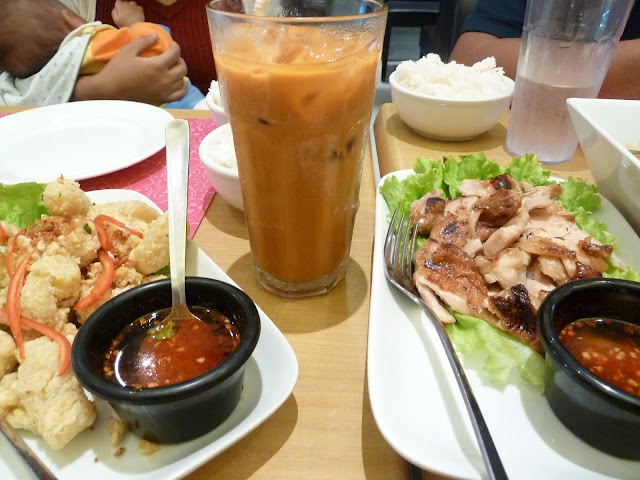 I just hope next time, we don't get rained on trying to get there.