Cat(s) Out of the Bag

There were two kitties who always loved to play.
One morning they woke up so early that even the humans were still happily rested in their beds. 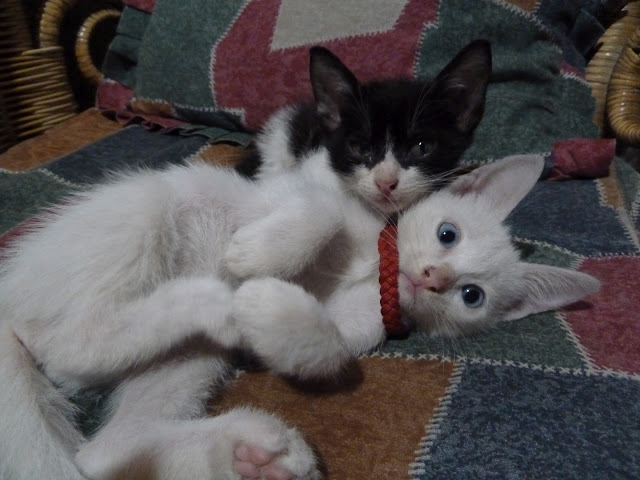 Their mommy was away enjoying the plants in the garden all by herself before her kitties occupy her time for the rest of the day.

So the two kitties explored the house in search of a toy for them to play.

When one of the humans woke up, she called out to the kitties and a flash of light brightened the surroundings for a second.

"Yikes! We got caught!" the kitties thought and froze in the middle of their play.

"It's my favorite bracelet!" the human said and pouted her lips in dismay.

"Oh no! What do we do?" the kitties looked at each other in terror.
"Beg her to forgive us with your blue eyes," said the kitty with black patches (aptly named Patches) "she always likes to gaze at them and call them pretty."
"No, you do it!" said the kitty with blue eyes (named Peachy, just to rhyme with her sister's) "she always adored your big green eyes and called you cute."
"Okay let's both do it!" they decided.

So the kitties stared at the human with the cutest, most innocent expressions they can muster. 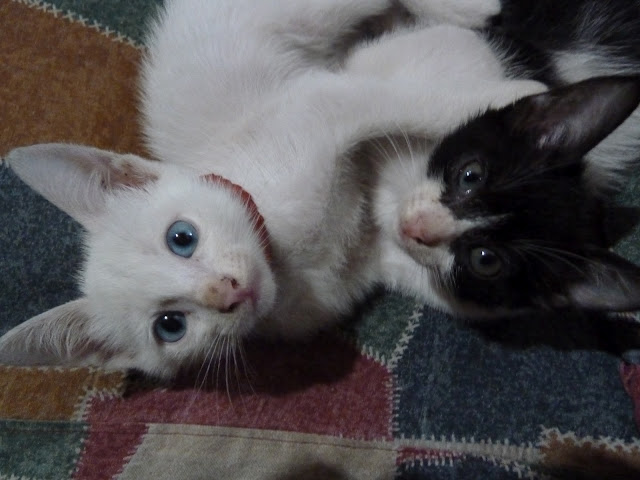 "Oh! How adorably cute!" the human thought when she saw their faces and quickly snapped a picture.

Then the kitties heard their mother calling.
Convinced of their success, they quickly jumped off the couch and left the human still squealing about their cuteness.
The two kitties were very excited to tell their mother about their recent adventure and how they conquered a human with just one look (or two).

P.S. Just random stuff to while my time away as I was bored at work. But this story is history now, as these kitties have all but grown up. They still look cute though, are still as mischievous and still try to use their cuteness to conquer me but I have become immune to some extent so they have resorted to employing other tactics. :-)