Getting Up Close with Mt. Mayon in Legazpi, Albay

On a summer getaway with friends a year ago, we went island hopping in Caramoan for 3 days and from there we had a stopover for lunch in Naga and then headed straight to Legazpi, Albay to explore the city.


Our first goal upon reaching Legazpi was to book ourselves a schedule for an ATV ride to see Mt. Mayon up close. Unfortunately, the trek to the side of the mountain would take more time than we had so we opted for the shorter trek.

I had never been on an ATV before, let alone drove a vehicle on 4 wheels by myself, so this was a new thing for me and still remains one of my most memorable travel experiences.

As we were eager to try out the ATV rides, we went out early to book our slots. We had a bit of difficulty with the booking but we were finally ready. I was too excited to take a lot of pictures so most of the pictures here are from my friend Chelle's uploads on Facebook. So be ready for all the pictures.

First, we were given an orientation on how to drive the ATV, the terrain that we were going to drive through and we got to know our tour guide. After about 20 minutes of practice driving around the rough terrain, we were on our way to get closer to Mt. Mayon.

I mostly remember the great scenery as we rode along and the varied terrain. There were sandy hills and plains; roads with a little stream that had big rocks here and there; picturesque streams still with big rocks but with fresh, green grass on both sides. It felt like we were in another country at times. It was hot as well but the promise of getting closer to Mt. Mayon kept us going.


There were also cliffs that we had to go up and get down from during the trek which caused a lot of potential trouble for me and raised the heart beats of my companions twice. I almost went straight off a cliff with jagged rocks below. My ATV's engine suddenly stopped working right when I was going down and I tried stopping the vehicle with my own strength but it was too large and heavy. Luckily, it stopped by itself just as it reached the edge of the cliff. 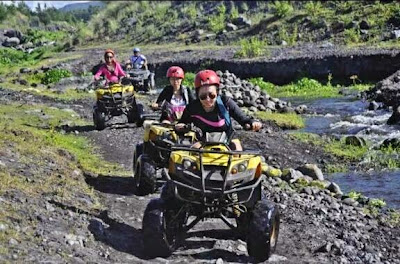 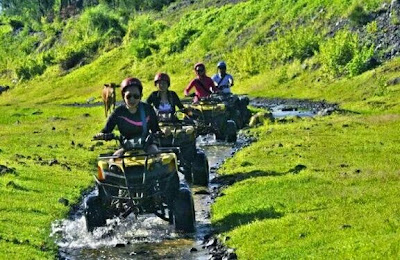 I know this will sound weird but I felt no alarm about what was happening. I was concentrating too hard on stopping the vehicle perhaps with might or will and perhaps one or the other or both worked. On the other hand, my friends and our tour guides' hearts were ready to jump out of their throats while watching what was happening to me. I feel sorry for stressing them this way but I'm thankful that they were looking out for me and that nothing bad happened to mar the experience in their memories.

Our tour guide also had an issue with his ATV and had it replaced. When we finally reached our destination, we took some time out from the sun, as it was really hot and had a drink of water as we chatted with our tour guides.

We were told that the mountain's cone shape is not perfect anymore. After it started spewing smoke a few months back, some rocks from the edge of the crater fell off. It looke like a knife had sliced a thin section from near the crater when viewed from far away. But it was really a tiny flaw and unless pointed out, one might never even notice it.

It was also a clear day so we had a great view of Mt. Mayon as background. We didn't let the opportunity slide and with the help of our tour guides, we had our obligatory pictures, with lots of jump shots, to celebrate achieving another item on our bucket list. 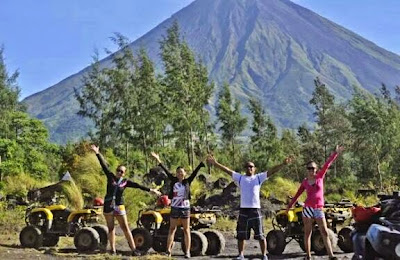 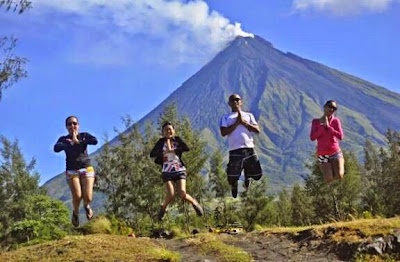 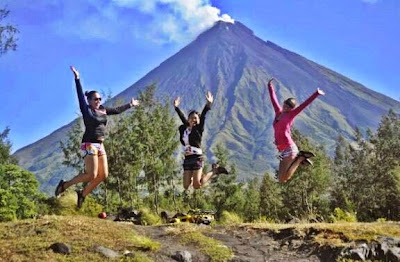 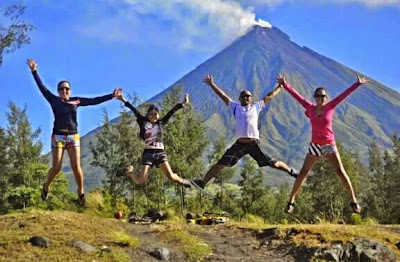 We headed back to return the ATVs and we took turns crossing small streams and making the biggest splash of water as we crossed. And of course, we took a picture before heading back to the exit. 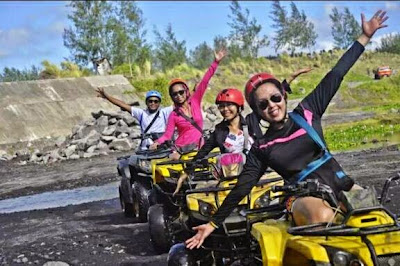 After this, I was convinced that I can learn how to drive a car one day and hopefully, I will. I also learned that communing with nature is a necessity so that we can function more effectively in our jobs and in our daily lives in general.

In retrospect, the moments of "me, almost dying twice" during this adventure made me realize that we should always try to enjoy every moment as they come along and that presence of mind can save your ass in extremely dire situations.